Microsoft opened their Office suite to 3rd party development in 2013. In the same way that the functionality of a smart phone can be extended with an app, Microsoft Office apps can be downloaded to add new features.

Microsoft itself created several apps, one of which is the Numbers About People App. It creates useful charts to visually represent data. 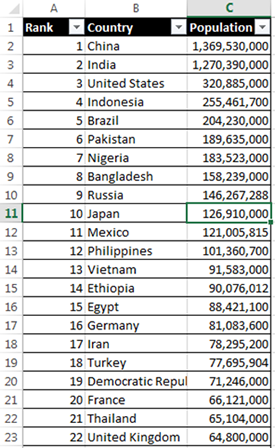 To start with, I needed data. Rather than copying and pasting or manually entering data, I clicked on the From Web option under the Data tab. I searched for the Wikipedia page for countries ranked by size of population and clicked import.
I had to clean up the data a little. If this were a permanent project, I might want to use Power Query, so that future changes to the data can be reflected in the graphs without manual intervention. For the purposes of this exercise, I just deleted rows and reformatted the information manually.

For more ways to make Excel work for you, take a training course from AdvantEdge Training & Consulting!

Resizing Rows and Columns in Excel